A bunch of amateur

snapshots at the Steampunk Fest.

They tell us authors that we have to advertise our book, story, blog, etc. I had that point driven home again at the Oxnard Steampunk Fest recently.

It’s a nice little fest with live music and many great steampunk outfits.

Attendance at the presentations was light (people didn’t show up). A classic case of; if they don’t know about it, they won’t come. They missed some good presentations.

It wasn’t because the presentations were held in a basement. The presenters needed to advertise. They needed to put a sign or banner, no matter how crude, up pointing to the underground rooms telling the attendees about the presentations and when they were. They needed a come on (called a landing page in advertising). This is just like your book, even if the reader likes what you write, if they don’t know it exists or what it’s about they won’t buy it. The presenters put up with low turn out, rather than going out and doing something to get more people to come to their presentation. If someone lets you down you have to take up the slack and do it yourself, even if you paid the person to do it.

Hundreds of books, courses, and blogs have been written about advertising your book or presentation, but if you don’t do anything you won’t get new readers. What’s the best thing you can do. That’s a moving target and depends on so many things there is no one answer. But doing something, even if it’s not the best thing is better than doing nothing. Life is too short to do nothing.

Be prepared. Have book marks, post cards, business cards ready to hand out. Keep a white board in the back of your car. Keep markers (in several colors) handy. Keep a flip board in your car. It’s crude and simple, but it means the difference between attendees and no attendees or sales and no sales.

It’s hard work getting out in front of people, some of the presenters were dressed in steampunk outfits. Outfits they put a lot of work into. Outfits that screamed look at me. Yet they would not take the extra step and advertise. It hard work doing something that someone else should have done, but you got to do it. If the other authors are not doing it and you are, then your book will be selling when theirs are not.

Remember doing something, even if it’s wrong, is often better than doing nothing.

I made a commitment to go to an editor.

I’ve been putting this off. For over a year I have been self-editing and polishing my manuscript to make it good enough to show to an editor. I put a lot of work into it. My critique partner has read the book at least three times.

Still, I know that the manuscript has problems I can’t see. I know I’ll be devastated when I get the red smeared manuscript back from the editor.

I’ve been stuck. I’ve been putting off, stalling, getting an editor. It’s worst than writer’s block, it’s the fear of an editor rejecting me, or hacking my work to pieces. I’m asking to be hurt, it’s like I’m asking a stranger to be beat about the head and shoulders with a two by four. The only thing that will get bruised will be my ego, but it’s such a fragile, little, thing and it will hurt.

But I took the step. The step forward and approached an editor. Now if she doesn’t laugh herself silly when she reads my manuscript.

I’ve had professionals, authors, and people on the street tell me that you have to have your book edited. It’s something I have to do.

Incorporating the editor’s comments will cost me hours and hours that I will never get back.

So join me. Ask other authors which editors do they use. What experiences have they had with their editors. They will tell you. Many will be anxious to tell you about their editors and will even recommend their editors.

If you get a recommendation for a good editor it’s not all roses and sunshine. Editors are busy. The editor may not be able to get to your book for months. I almost guarantee it. The better the editor the busier they are. The editor may reject your work, not you, your work because it’s the wrong genre (I don’t do science fiction), it’s not the style of writing they edit, the level of writing is not up to the level it needs to be. I’ve seen all of these. It isn’t pretty. It’s devastating to the writer. On the other hand there are lots of hungry editors out there, but if you get feedback consider it, they may be right no matter how great your writing looks.

Stay strong, write on, and go get an editor.
Professor Hyram Voltage

At the Gaslight Expo I talked to an author I know. She recommended an editor she had just used. The author writes graphic novels and had just published her first novel.

That and the fact that conventions get me fired up I went and contacted the editor. She asked for a copy of the manuscript.

I wasn’t expecting that. It’s Friday and panic time. I’m still working with the critique group on a review of the last chapters of the book and I haven’t cranked in their comments from the review of earlier chapters.

I had a presentation to do Friday night and getting that polished took half the day. The presentation went OK, but I was so tired that I was not thinking straight, and I did not get the comments cranked into the manuscript. I ended up asking the editor if I could send the manuscript in Monday and she agreed.

It’s Monday and I should be working on the manuscript.

I took a big leap and committed to getting an editor and stop trying to beat the manuscript into better shape.

Excuse me, but I have to get back to the manuscript.

Here is some pictures from the talks; 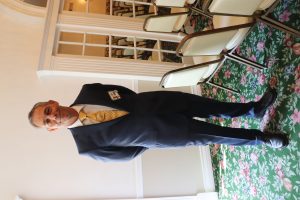 I attended the Gaslight Expo in San Diego this weekend (10-5/6). Here are some pictures I took snap shot style.

Here are some pictures of the staff in action.

This is Check-in early Friday morning;

This is check-in late Saturday afternoon;

Be sure to stick your head in and say thank you to the volunteers that man the tables, and bring chocolate. 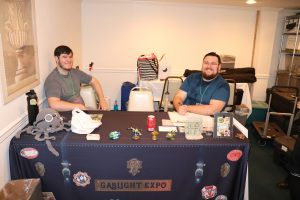